Coral is a gem who lives on Earth.

Coral is about 6 feet tall. She has brown skin, with darker brown strips of skin around her neck, face, arms, and legs. She has bright red colored hair, blue eyes, a small round nose, and plump lips. She wears a dark blue/grey shirt featuring a brown diamond shape on the chest. She wears brown boots, a grey skirt, and a pot around her back that held sand. Her gem is located on her right hand.

Coral is incredibly selfish and cares about herself first and foremost. She is annoyed very easily, it does not take a lot to get on her bad side. She is incredibly brutal when dealing with her opponents, and shows no mercy. Despite that, she shows a soft place in her heart for gems that she admires and thinks highly of.

Coral is a gem who previously worked under Yellow Diamond, and had fought in the rebellion on Earth. She was incredibly brutal; she would shatter enemy gems quickly, and would show no mercy. She would even kill allies who she thought "got in the way". Because of this, Yellow Diamond decided to have her poofed, and kept by one of her quartz soliders for safe keeping. Years later, her gem was found by a Pearl. She regenerated, shattered the pearl, and retreated to Earth, where she lives currently.

Psammokinesis: Coral has the ability to shape and manipulate sand, a naturally occurring loose, fragmented/granular sedimentary material composed of finely divided rock and mineral particles ranging in diameter from 0.0625 mm (or 1⁄16 mm) to 2 mm. 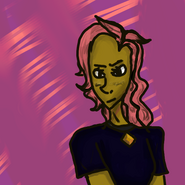 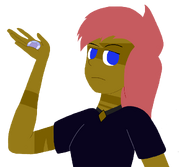 St. Akira
Add a photo to this gallery
Retrieved from "https://the-gem.fandom.com/wiki/Coral?oldid=8597"
Community content is available under CC-BY-SA unless otherwise noted.