Bismuth is an OC created by EnderEmerald46.

Bismuth is a pink gem, with somewhat styled hair and pigtails, she has one normal eye and a pink button eye. Her gem is on her chest, and she wears a pink dress and slippers. Her fingers seem to have fused together, giving her ovenmitt-like hands.

One day, Andesine found a plushie in the Donut Shop that resembles a female gem. She calls Apadian about it, and soon Apadian and Garnet go to the shop and manage to change Bismuth from being a plushie to a living girl. Due to the amount of time she spent as a plushie, she is stuck with a button eye and ovenmitt-like hands. She also is unable to remember much before she was plushified, so a lot about her is unknown. However, she stays optimistic, or at least tries to.

Bismuth, although shaken by being stuck as a plushie, is somewhat playful and happy, although she does have somewhat constant fears about turning back. She does suffer nightmares occasionally, although the number is way less than Apadian, and only center around turning back into a plushie. She is mostly unaware about what she was like pre-plushification, so it is unknown if she acted completely different beforehand. She occasionally slips back into a plushie-like mindset without realizing, but will snap back into reality when interacted with. 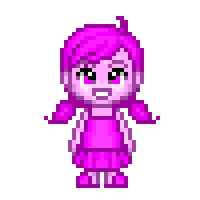 Bismuth Chibi
Add a photo to this gallery
Retrieved from "https://the-gem.fandom.com/wiki/Bismuth?oldid=5835"
Community content is available under CC-BY-SA unless otherwise noted.